Breadalbane is home to the Ben Lawers National Nature Reserve while about 25% of the Loch Lomond and The Trossachs National Park also lies within the Breadalbane area.

Nature lovers will find a landscape shaped by geology and ice, populated by giant trees and rare arctic and alpine plants, and inhabited by majestic birds and animals such as golden eagles, ospreys and red deer.

From giant trees to Arctic plants 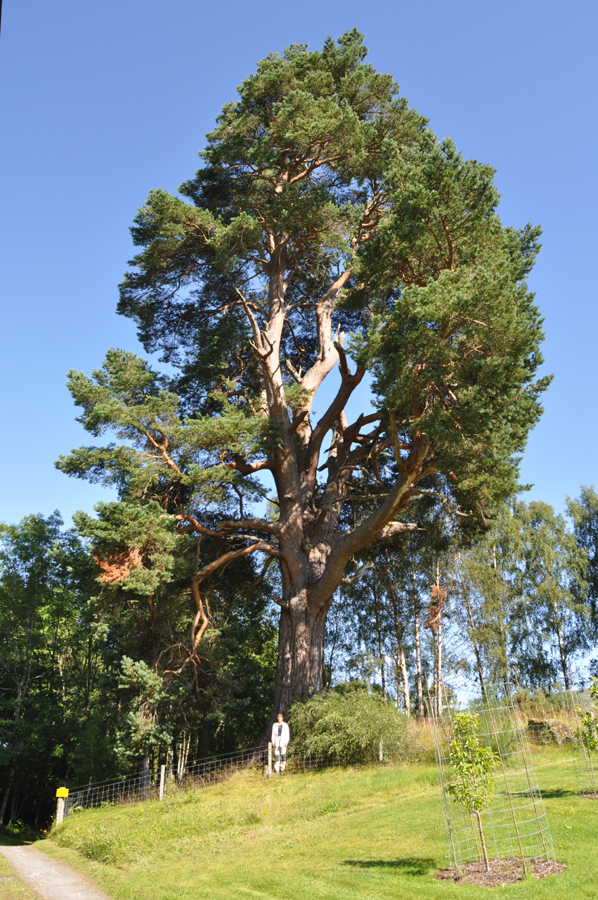 Large Scots Pine, MorenishPerthshire is known as "Big Tree Country".  The world's tallest hedge and Britain's widest conifer and tallest Japanese larch are to be found in Perthshire, while at The Hermitage near Dunkeld one can see a Douglas fir (named after Perthshire plant hunter David Douglas) over 210 feet tall. Within the Breadalbane area the Fortingall Yew is thought to be the largest in Europe and may also be the oldest living thing in Europe (anything between 3,000 and 9,000 years old).

After the Ice Age, much of the Scottish Highlands was colonised by Scots Pine forest.  Nowadays, less than 1% of this ancient Caledonian forest remains but remnants containing gnarled old Scots Pines with their distinctive red bark can still be seen at Meggernie in Glen Lyon, in Cononish Glen near Tyndrum and in upper Glen Falloch.

At the other end of the scale, Ben Lawers is possibly the most important UK site for lichens and is also the home of the most celebrated collection of mountain plants in Britain. These surviving outliers of both arctic and alpine floras are relict and isolated and include such rarities as alpine gentian, alpine forget-me-not and alpine fleabane. 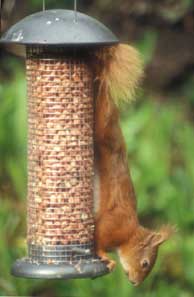 Red SquirrelBreadalbane is home to the most iconic of Scotland's creatures - the red deer stag, the golden eagle and the salmon.  Other rare and protected species such as ospeys and pine martens are present while red squirrels are relatively common, even around human habitation.

Red deer stags and hinds can be seen on the high ground throughout the area, though they can be easier to spot in winter when they seek lower ground, especially when there is snow cover.  In the rutting (breeding) season in October and November, the roaring of stags can be heard over long distances.

The River Tay system is probably second only to the River Tweed in terms of annual rod-caught salmon numbers, with over 7,000 fish landed in 2011.  80% of fish caught were returned to the river alive. 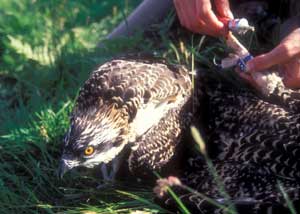 Ringing an osprey chickWith a watchful eye, and by being in the right place at the right time, golden eagles can be seen soaring above the ridges alongside Strath Fillan, Loch Tay and Strathearn.

Nesting ospreys have returned to the area and can be seen around Loch Tay and Loch Earn, from April to end-August.

As its name indicates Breadalbane ("the high ground of Scotland") lies wholly in the Scottish Highlands, north of the Highland Boundary Fault.

The ancient rocks of the Breadalbane area were deposited as sand, mud and limestone several hundred million years ago, probably between 740 and 515 million years before the present day. Some boulder beds, notably on the mountain Schiehallion, represent glacial deposits from a worldwide glaciation that occurred about 700 million years ago. About 600 million years ago, basaltic lavas flowed over much of the sea floor. This Dalradian rock sequence, as it is known, was deposited on the eastern margin of a large continent, most of which is now North America. 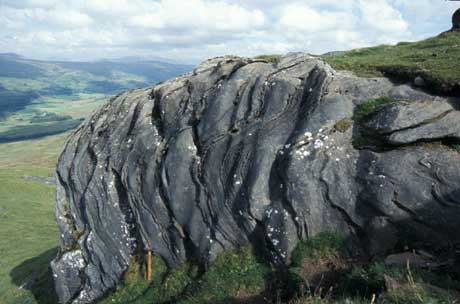 Folded Dalradian rock above Glen DochartAbout 450 million years ago, in the early part of the geological time period known as the Ordovician, the Dalradian rocks of the continental margin collided with oceanic and volcanic island arc rocks on the present day south east. This collision, known as the Grampian Orogeny, resulted in intense folding and thrusting of the Dalradian rocks and metamorphism of the sand, mud and limestone into quartzite, schist and marble. The metamorphosed limestone has been worked to provide fertilizer and evidence of lime kilns can be seen in many places.

Over most of Breadalbane, south of Glen Lyon, these metamorphic rocks are relatively flat-lying. The unusual thing about them, however, is that as a result of folding they are upside down!

The next major geological event to take place occurred in Silurian to Early Devonian times when the metamorphic rocks of the Grampian Highlands were displaced by a series of major faults. In Breadalbane these include the Tyndrum, Bridge of Balgie and Loch Tay faults.

You can see the evidence of the Tyndrum Fault on the hillside SW of Tyndrum where the vein that filled the fault produced thousands of tons of lead plus associated zinc and silver at various times between 1741 and 1862. An offshoot of the Tyndrum Fault in the Cononish glen may shortly go into production as Scotland's only gold mine.

The evidence of the Loch Tay fault is also clear on any map, as glacial erosion along the line of the fault has created the "bend" in the central part of the loch where the water depth is greatest. 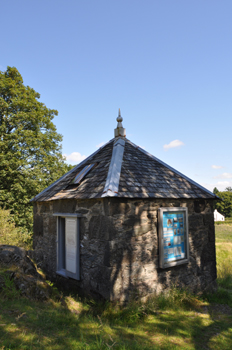 Earthquake HouseMinor movements can still occur on these faults, the most recent being a 2.7 Richter local magnitude event at a depth of 5.4 kilometers on the Bridge of Balgie ("Killin") fault in Glen Lochay on 20th January 2005 and a smaller 1.8 event, which was heard as well as felt, at a depth of 2 km about 3 km north of Killin on 31st October 2011.
The southern boundary of Breadalbane is defined by the Highland Boundary Fault, a major SW-NE trending dislocation which runs from Achill Island on the west coast of Ireland to Stonehaven, south of Aberdeen.  Movements on the fault have occurred in historic times and in the 19th century a series of movements on the fault, or minor associated faults, resulted in the construction of a building to house one of the world's first permanent earthquake recording instruments (seismometer) at Comrie.  You can still see a working seismometer at Comrie's Earthquake House. 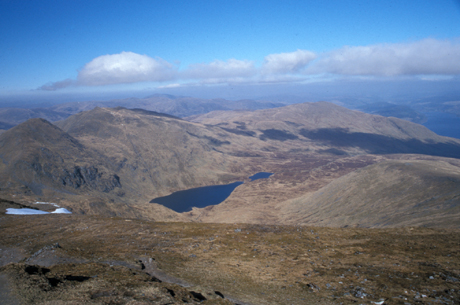 Lochan nan Cat from Ben LawersThe most obvious features of the Breadalbane landscape, however, result from the much more recent Pleistocene glaciations of the past 1.6 million years. Ice-sculpted mountains with large corries, U-shaped glens and elongated loch basins all attest to the abrasive effects of ice while glacial deposits abound in the hummocky moraine deposits that occur throughout the region and the rather more unusual dried lake bed that lies in Glen Dochart between Ledcharrie and Lix Toll, SW of Killin.
Tweet