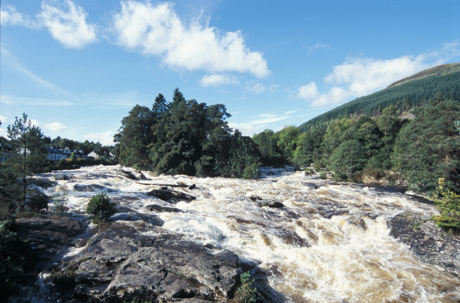 If it's wet, use it! Make the most of any heavy rain by visiting some of the waterfalls in the area. Killin's Falls of Dochart are really just rapids, though spectacular when in spate (flood), but there are also several falls with a substantial drop. From northeast to southwest in the Breadalbane area, here are some that you can visit. 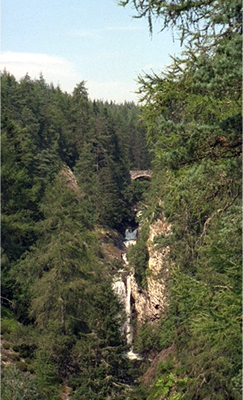 Falls of Bruar, Bruar, by Blair Atholl. (2.3 km circuit; 100 m ascent). Accessed from the House of Bruar shopping halls (worth a visit in themselves on a wet day), 5 km west of Blair Atholl on the A9. The Falls were made famous by Robert Burns, Scotland's national poet, who visited them in 1787 and wrote a poem: The humble petition of Bruar Water to the Noble Duke of Atholl.

Linn of Tummel, by Pitlochry (National Trust for Scotland). 3 km northwest of Pitlochry on the B8019. More like rapids rather than falls.

Black Linn fall and pool on the Falls of the Braan; part of The Hermitage National Trust for Scotland woodland property near Dunkeld. Park at The Hermitage car park (1.6 km return; 15m ascent). Douglas Firs up to 64m (210 ft) in height; great display of bluebells in mid-May; salmon leaping at the falls in late summer and autumn. Walk on up to the Rumbling Bridge Falls. 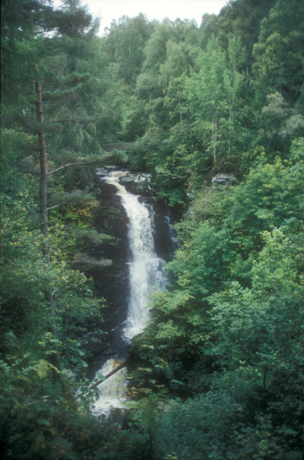 Falls of Acharn from the village of Acharn on the South Loch Tay road (2km circuit; 120 m ascent). Carry on up from the Hermit's Cave to view the rapids above the falls.

Deil's Cauldron, Glen Lednock, Comrie (6.0 km circuit; 100 m of ascent). Leave from the car park at the east end of Comrie at the entrance to Comrie golf course. 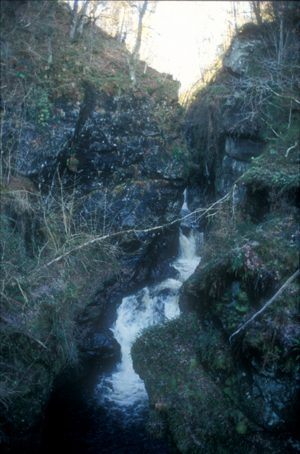 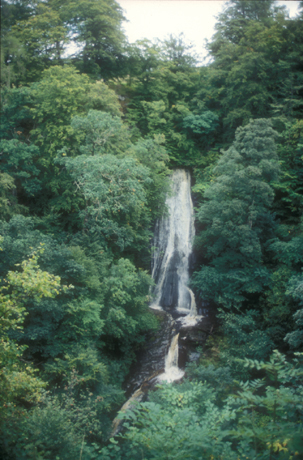 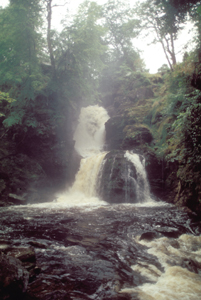 Falls of Edinample. On the South Loch Earn road, 2 km from the centre of Lochearnhead. Park next to the small building on the west side of the Burn of Ample, walk across the bridge and descend to the foot of the falls by the path on the east side of the burn. 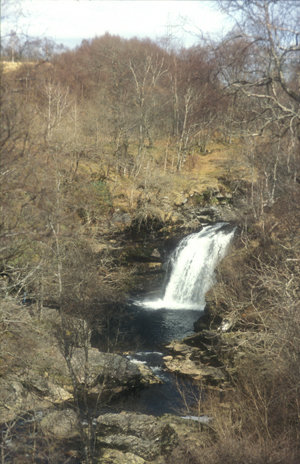 Falls of Falloch (plus the waterfall of Ben Glas Burn). Park at the signposted car park and picnic spot on the east side of the A82 between Crianlarich and Inverarnan (7 km south of the Crianlarich T-junction). Also, after a lot of rain, the "mare's tail" waterfall of the Ben Glas burn looks spectacular when seen from the car park of the Drover's Inn at Inverarnan.
Tweet